First and foremost, our prayers go out to our southern friends and fellow Americans who have been fighting off hurricanes Irma and Harvey. The disastrous effects are far reaching. Lives have been lost and homes have been destroyed. For those of us who haven’t experienced it, we can’t even begin to imagine our daily routines being interrupted with such a harsh reality. 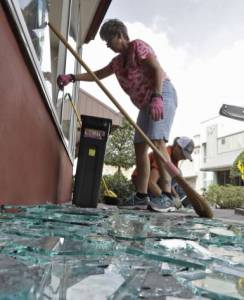 According to FEMA, 40% of small businesses never reopen their doors after a disaster, while only 29% of those remaining are still in business after two years. Even if they manage to rebuild and get their employees back to work, the return of their customers before they have to fold is never guaranteed.

In an interview with Fox Business during the wake of hurricane Harvey, the former Joint Task Force Commander during Katrina, Lt. Gen. Russel Honore, discussed the struggles in getting these communities back up and running after such a disaster,

“A lot of these small, rural areas did not take the grid down, so you watched over the weekend and transformers popping and when that happens that entire system has to be built.”

Obviously, step one is electricity. He went on to echo the statistics and point to a real need for a different approach,

“You know the old numbers, 40% of small businesses don’t survive these events because the grid doesn’t come up, they don’t have the workers and the people that they used to work for are not open.  So the quicker they can find a model to get businesses up, the quicker people can get back and get the schools up.  But we’ve got to find a different way of doing it.”

You can watch the entire interview from Mornings with Maria here, and we encourage small business owners in any area to visit FEMA’s webpage specifically for those hoping to be prepared instead of caught off guard.

Liked it? Take a second to support GrowTheHeckUp on Patreon!

Nathan Mathis is affectionately known as Beardo, the bearded weirdo. He is a follower of Christ, a self-made thousandaire, and a lover of Hip-Hop. He currently owns and operates CHHToday.com and runs an accounting firm with his father.
@CHHToday
Previous Did Jesus Heal the Mentally Ill?
Next Create a Lean Canvas, the One Page Business Plan People Will Actually Read

Is Pedogate 2020 Just a Conspiracy Theory?

George Floyd Body Cam Footage: Did the Media Give An Accurate Account Of the Circumstances Surrounding His Death?

Join me LIVE on Periscope or watch previous broadcasts now!

Help us keep GrowTheHeckUp.com going by offering a donation of any amount: