In a recent Instagram repost, Eric Benet called out what he believes is the modern face of white supremacy—black rappers. The 41-year-old R&B singer posted a message calling out rap artists who rap about killing black people, degrading black women, abusing drugs, materialization; living a low life not as artists, but rather the “black face for white supremacy”. In what he calls an ‘inconvenient truth to some of the rich and famous”, the singer noted that these rappers were being used to destroy their own people.

Artists like Fat Joe, Jae Millz, and Wale were quick to dismiss the point with retorts like “It’s just entertainment” or “It’s a good point… but not the only point”. While emotions and opinions ran high on the thread, it fell far short of any artists coming in to gut-check the facts. In reality, hip-hop is a billion dollar industry that financially outperforms every other genre worldwide, so the crickets from other industry insiders come almost on cue and as no surprise. 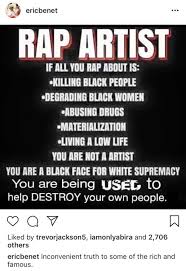 In the meantime, let’s not argue the facts: misogyny, violence and materialism have a real and dominant presence in modern-day hip-hop.

Also facts: With the exception of a few melanin-less sprinklings, rap is a genre dominated by performers from the same communities they target—communities of color.

Courage, strength, leadership, self-control, and discipline are universal themes of manhood that permeate cultural boundaries worldwide. Yet, we find these ideals unrecognizable as a thick and twisted mass of gnarly roots covering the surface of mainstream rap. Black men reshaping a false manhood for resale as violence, lust, abuse of power and physical prowess; criminality, sexual exploitation, and the degradation of the wives and daughters they are called to protect.

Women who should be ascribed values such as warm, loving, creative, hard-working, bright, and honorable are traded for a lyrical imagery that casually paints them as seemingly inanimate objects here to be defiled and to satisfy the sexual curiosities of strangers. Hollow and hardened prostitutes. Mindless, glossy blow-up dolls designed to excite man’s most depraved passions in exchange for money, a ride in a car, and some high-end fashion. Literally swapping us from treasure to trash, rap music is, in fact, the only music genre that treats its own with such contemptuous and violent disregard. And it’s the only genre that has its focus on the black ear.

It could even be argued that this is the corporate exploitation of the absence of strong men of character in the black community and home (even though there are increasing numbers that could dismantle that idea). It could be argued that we are being taken advantage of or that these young men are simply storytellers and tale bearers sharing their stories. But ff these artists are merely messengers of what we already know are simply corporate plantations, wouldn’t they deserve to be called out and shown the door?

White supremacy at its core believes it is superior to all other races and seeks to dominate society. In order to undermine another community, it would need to first dissolve the families that make it. Chopping off the head of a family and distorting the roles to turn on one another makes a novel start. Just saying.

Liked it? Take a second to support GrowTheHeckUp on Patreon!

Kristin is a Christ-loving wife, working mom, friend and wannabe crafter. She is a passionate advocate for intentional parenting, purpose centered marriages and families, and lifelong education.
Previous Why Waiting on God Is Keeping You Single
Next CryptoConcurrency Startup Donates $29 Million to U.S. Public Schools

Is Pedogate 2020 Just a Conspiracy Theory?

George Floyd Body Cam Footage: Did the Media Give An Accurate Account Of the Circumstances Surrounding His Death?

A Message to the Christian Battling Sexual Sin

Join me LIVE on Periscope or watch previous broadcasts now!

Help us keep GrowTheHeckUp.com going by offering a donation of any amount: